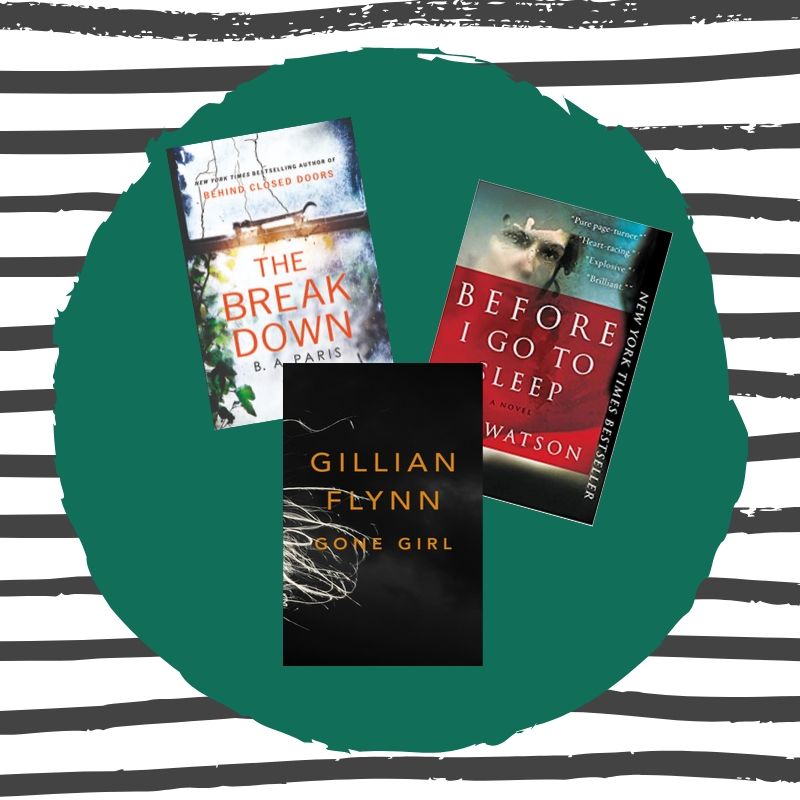 A very common question in the library is “what are other people reading?”. People like to read the current, hot reads because a)if it’s popular, there it is probably good and b)they can converse with other people about it. Lately when I get that question I am sending more and more people to lists of domestic thrillers.

Five years ago Gone Girl by Gillian Flynn was published and became a word-of-mouth phenomenon. People loved the twisty, soapy drama and while the characters were kind of terrible people, they were relatable and recognizable in a way that a hard-boiled P.I. isn’t. Since then the sub-genre domestic thrillers has been red hot.

Most domestic thrillers have female protagonists and are told through her point of view, though again, this is not the rule. It is a very effective way to get a reader engaged quickly. Many of these protagonists have very established relationships (whether they are a wife, mother, friend) and relatable careers making them easily accessible. They seem like someone you could have met in your own life. However, most of these women have a flaw-alcoholism, dependence on pills, history of mental illness- that is revealed to make you question their judgment. Many of these titles also feature a central male character who is controlling and/or has sociopathic tendencies. Generally it is just the main character who notices these; Other characters find these men as upstanding and beloved members of society. These internal issues and external relationships set up a riveting story where you don’t know what is true until the last page.

Finally, the twist. So many of these books have a moment in them where the story is flipped through a revelation. For those who read or watched Gone Girl by Gillian Flynn, this is where you find out what really happened to Amy. It could be where you find out about a protagonists addiction, or it could be an event from the character’s past that has been alluded to but finally revealed. This typically takes place somewhere between half-way and three-quarters of the way through the book. Because most of these types of books feature this twist, readers are on the lookout for these, forcing authors to be more clever than ever. One of the best reactions is when you can truly say that you didn’t see that twist coming.