Teen Titles on the Immigrant Experience 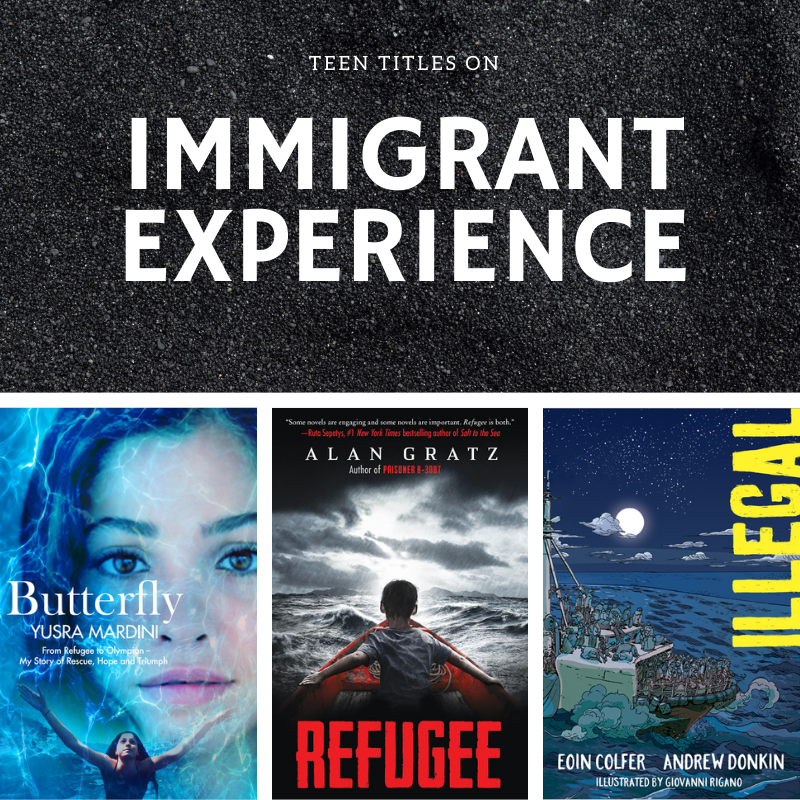 Immigration is an experience many of us have never been through. That can make it hard to understand what it means to be an immigrant when reading about it in a history book or hearing about it in the news. From our stable homes it is hard to imagine what would make a person leave absolutely everything they have ever known to travel often long and dangerous routes to a new place. In the last few years, there has been many well written books published that take on this difficult topic. Both nonfiction and fiction, these books below published for teens, but perfect for adult readers as well, introduce readers into a life very different from their own. Each story is unique, but united in strong characters overcoming astonishing obstacles.

When young Syrian refugee Yusra Mardini realized her boat's engine shut down as she was traveling from Syria to Greece with other refugees, there was no hesitation: she dove into the water. Surfacing, she heard desperate prayers and sobbing from the passengers in the sinking boat above her. Between the waves, her elder sister Sarah screamed at her to get back on the boat. But Mardini was determined. She was not going to let Sarah do this alone. Grabbing the rope with one hand, she began kicking up the black water, inching the boat towards the distant shore.

This bold act of bravery saved the lives of a boatload of refugees heading to Turkey from Syria. After her arrival in Greece, Mardini, focused and undeterred, worked toward a lifelong goal: to compete in the Olympics. She succeeded, and competed in 2016 on the Refugee Olympic Team in Rio de Janeiro.

One mission in common: ESCAPE.

Josef is a Jewish boy in 1930s Nazi Germany. With the threat of concentration camps looming, he and his family board a ship bound for the other side of the world…

Isabel is a Cuban girl in 1994. With riots and unrest plaguing her country, she and her family set out on a raft, hoping to find safety and freedom in America…

Mahmoud is a Syrian boy in 2015. With his homeland torn apart by violence and destruction, he and his family begin a long trek toward Europe…

All three young people will go on harrowing journeys in search of refuge. All will face unimaginable dangers–from drownings to bombings to betrayals. But for each of them, there is always the hope of tomorrow. And although Josef, Isabel, and Mahmoud are separated by continents and decades, surprising connections will tie their stories together in the end.

His sister left months ago. Now his brother has disappeared too, and Ebo knows it can only be to make the hazardous journey to Europe.

Ebo's epic journey takes him across the Sahara Desert to the dangerous streets of Tripoli, and finally out to the merciless sea. But with every step he holds on to his hope for a new life, and a reunion with his sister.

Each book synopsis from Goodreads.com